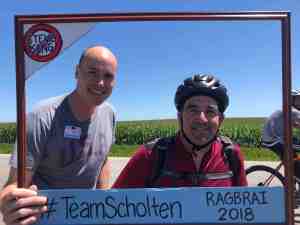 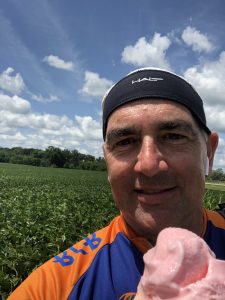 I spent a week last month biking across the beautiful state of Iowa in RAGBRAI, the world’s largest bicycle ride that has been held in that state for the last 46 years. RAGBRAI, sponsored by the Des Moines Register newspaper, stands for the Register’s Annual Great Bike Ride Across Iowa. Iowa is gorgeous (surprisingly hilly by the way) and the people are wonderful. If you are into bikes, you need to put RAGBRAI on your bucket list.

RAGBRAI was also a reminder to me just how much immigration impacts rural and small communities as much as large cities in highly populated states.

Iowa lived up to its reputation when it came to corn. Days of riding were dominated by cornfields (as well as soybean and other crops). And farms today are only surviving with the help of large numbers of immigrant workers. The Department of Labor estimates that 46% of the roughly two million farmworkers are unauthorized immigrants while some experts put that percent as high as 70%. I spoke to Iowans along the way who are genuinely fearful of tariffs driving up the costs of their crops. If you add a major spike in prices as a result of agricultural workers being deported, that would probably destroy the agricultural industry in Iowa (and the rest of the country).

And then there is meat processing. Iowa is home to hundreds of pork and beef plants. I biked past many along my 428-mile route and the first town I stayed overnight in has more than half of its workers employed by beef and pork producers and processors. The town, not surprisingly, is largely populated by Hispanic immigrants who have moved there for the ready work.

The town happens to also be in the congressional district of Republican Congressman Steve King, the infamous legislator who has made a career out of attacking immigrants. This amazes me because it’s pretty clear that the economy in his district is completely dependent on foreign workers and there is no way those workers will be replaced by US workers who have, not surprisingly, flocked to higher paying, less back-breaking jobs.

King is in a competitive race for Congress for the first time in years against J.D. Scholten, a young Democrat with a considerably more progressive view of immigration. I happened to meet J.D. during the ride and talked to him about what immigration means to the western part of his state and he gets it. He’s about solutions to make the process work better for his state and for the country. Not about scoring political points by raising the fear level of his would-be constituents. By the way, if you want to donate to a campaign where it would make a difference, send J.D. some love.

Of course, if you’re reading this in late August, you have likely heard the news of Mollie Tibbetts, a young woman in Iowa who was killed in Iowa after a weeks-long missing person’s search for her. While I was riding across the state, I saw a number of posters and signs with Mollie’s face asking people to please aid in finding her. It’s heartbreaking to know now that she was killed. Police have arrested an unauthorized immigrant for the crime. While this crime is tragic and the killer should be brought to justice, it is also terrible that demagogues use a single crime to paint the entire 11 million people in the US without documents as a criminal class. The victim’s family asked that people not politicize the crime and the arrest. But that has been soundly ignored. Consider Newt Gingrich who was all too enthusiastic to make this crime a campaign issue for November.

The Cato Institute has done a good job providing real facts on the issue. Immigrants are far less likely to commit crimes than their native counterparts. Cato’s Alex Nowrasteh debated the issue with Tucker Carlsen on Fox News and, well, you can judge for yourself who had the better arguments.

Iowa will be an important state for Democrats if they are to retake the House of Representatives in November. The Cook Report has moved two Iowa House seats currently held by Republicans to the tossup category. And as for Steve King, his race recently moved from solid Republican to safe Republican. But something tells me that race is going to get closer, despite the efforts of extremists to paint immigrants as a threat to Iowa.