The White House has appeared to have received the legal go ahead to proceed with implementing a proposal hinted at in the President’s executive action remarks in November 2014. One of the more popular proposals aimed at retaining skilled workers in the US is the creation of a “pre-registration” process that would allow those sitting in employment-based green card backlog lines to obtain a work authorization document continue working legally in the US while awaiting the green card. I’ve obtained a legal memorandum that I am trying to authenticate that lays out the proposal and its legal support.

Entitled “Authority to Modify Certain Procedures Related to Petitions for Employment-Based Immigrant Visa Petitions”, the document sets out the background for the proposal noting that in the Secretary Jeh Johnson’s November 20, 2014 memorandum, he was directing USCIS to consider “regulatory or policy changes to better assist and provide stability to the beneficiaries of approved employment-based immigrant visa petitions. Specifically, USCIS should consider amending its regulations to ensure that approved, long-standing visa petitions remain valid in certain cases where they seek to change jobs or employers.”

The memorandum notes that the USCIS has a working group on I-140 Executive Action initiatives and that the memorandum provides a legal assessment of two proposals under consideration. The are the following:

The memorandum notes that the proposals ARE permissible as long as they are made through notice-and-comment rulemaking.

The memorandum notes as well that while I-140 beneficiaries would be able to change jobs without fear of losing their underlying immigrant visa petition, most beneficiaries would be unable to adjust status in the US since they would no longer hold non-immigrant status. Consular processing would generally be the route to permanent residency (which, the memorandum notes, may have the side benefit of deterring fraud or misuse of the program).

Regarding the legality of the proposals, the memorandum first cites to the DHS Secretary’s broad authority under INA Section 205 to establish the criteria for revoking the approval of any petition approved by him under the Immigration and Nationality Act. Thus, amending USCIS regulations to provide that an employer withdrawing or terminating its business will no longer automatically result in an I-140 revocation is permissible.

The memorandum also notes that the DHS Secretary has broad authority to approve employment authorization under INA Section 274A(h)(3) to various classes of immigrants and that adding the class of “beneficiaries of approved employment-based immigrant visa petitions (and their derivative dependents)” would be a permissible regulatory change.

The memorandum then notes that these changes would be consistent with prior congressional actions including the adjustment portability provisions of the American Competitiveness in the Twenty-first Century Act of 2000 (AC21).

The I-140 revocation proposal envisions a system where approved I-140s continue to remain valid for the beneficiary despite the employer’s withdrawal of the petition or the termination of the business as long as 1) more than one year has passed since the approval of the petition and 2) the beneficiary has a job that is in the same or a similar occupational classification as the one in the I-140. This is very similar to the INA Section 204(j) provision for adjustment portability. The proposal would not alter other rules governing revocation such as those governing revocations for fraud or willful misrepresentation.

Regarding the second proposal on EADs, the new system would extend employment authorization to the beneficiaries of approved employment-based immigrant visa petitions regardless of whether they have filed their applications for adjustment of status. The memorandum doesn’t note whether this provision would be limited to I-140 petitions or would also include I-360 petitions for religious workers.

The memorandum concludes by re-stating that USCIS has the authority through notice-and-commenting rulemaking to make both of these changes.

Despite these uncertainties, I do believe those in employment-based green card category backlogs should view this document as very good news. Hopefully, the regulatory process will be fast-tracked and these proposals will become law sooner rather than later. 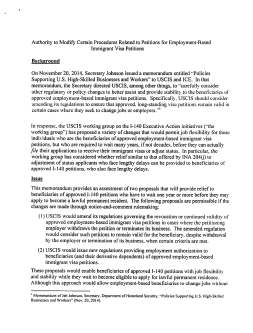 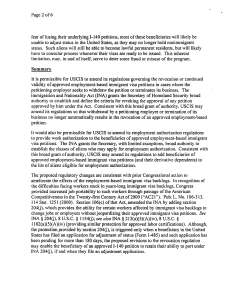 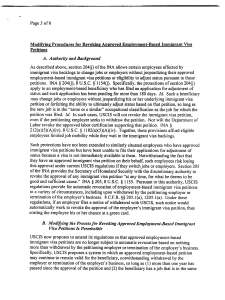 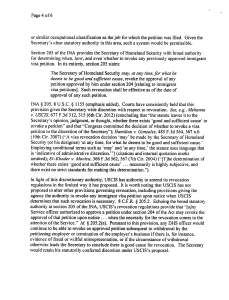 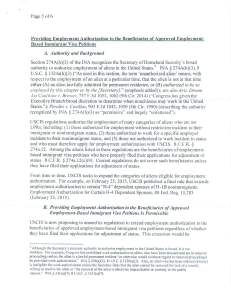 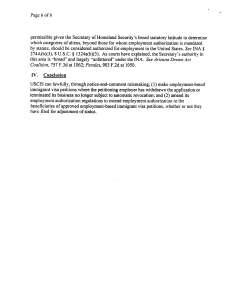